In 1840, Mr. Smiley, a Presbyterian, began a Sunday school in the old Duverje plantation home. Algiers United Methodist Church was organized in 1844 from this Sabbath school and may be the oldest Christian congregation on the west bank of the Mississippi River within the New Orleans area. First pastored by a former sea captain, the church was called the Good Hope Chapel until 1847 when it was chartered by the Methodist Episcopal Church, South.The first church building was located near the river bank on a site that was donated by J.B. and Alix Duverje Olivier. In 1857 the bargeboard structure was abandoned and a new building was erected at the corner of Delaronde and Lavergne Streets. The second church was known as the Finger Up Church and in turn was destroyed by the September 19, 1915 hurricane.

The present site was purchased in 1916, and the sanctuary was dedicated in March, 1922. War bonds purchased by the Methodist Episcopal Church, South during World War I were donated to the congregation to help build the Colonial Revival style church. A Moller pipe organ was included in the new construction as well as classroom and meeting space in the half basement. 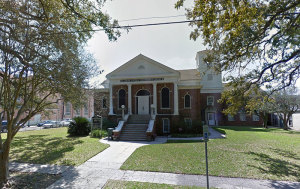 The Dr. A.C. King educational building was added in 1955 which includes a belfry that houses the 1883 fire bell donated by the Ship Carpenters and Caulker’s Union. Facetted glass windows designed by New Orleans glass artist Milton Pounds were installed during renovation in 1979.

The congregation of Algiers United Methodist Church is proud of their 156 year history of service to God in the Algiers community. We offer a warm and loving place to worship God and to grow spiritually. Activities and classes for all ages are offered for anyone seeking to share God’s Kingdom in our neighborhood

Join us for Sunday Serivces

Our Church is open. You can also watch us live on Facebook Sundays @ 11:00.

Also ask about all of the other programs we have going on this month.

Rev. JoAnne Pounds came to Algiers UMC in July 2021 with 14 years of ministry experience. Holding a Master of Divinity from Perkins School of theology, she loves to connect people, organizations, and ideas to help form deeper relationships with God and more loving relationships with humanity.